The third InScience Jury Award will be presented during the seventh edition of InScience – International Science Film Festival Nijmegen. The jury consists of three professionals with different expertise: Sandra den Hamer, George van Hal, and Anna Gimbrère. They watch nominated films and will announce the best science film of InScience 2021 during the festival. The director of the winning film will receive the InScience Jury Award worth € 2,500. We proudly present the jury to you:

Sandra den Hamer is the director of Eye Film Museum. Before that, she was associated with the International Film Festival Rotterdam for 23 years, where she eventually became director. In 2016 she received a Golden Calf for Film culture.

Den Hamer’s passion for film started with a love for theatre. ‘In my secondary school years, I saw a performance by the Van Warmerdam brothers, among others, which I found so inspiring that I started studying theater sciences.’ During the training, however, she enjoyed the film subjects over the theater subjects, so Den Hamer ended up in the film world. Because of her extensive knowledge of film and experience with film festivals, Den Hamer was approached to sit on the board of the organization when InScience was founded. ‘I found it very interesting because a festival that focuses very specifically on film and science did not yet exist in the Netherlands at the time.’ After Den Hamer’s term on the board, she became part of the advisory board and is, therefore, a member of the jury this year. ‘That gives me the opportunity to watch more films again, so I wanted to do that.’

During the festival, Den Hamer plans to pay particular attention to how the film looks. ‘I am not necessarily concerned with the story itself – although that is of course also interesting – but mainly how the story is portrayed,’ says Den Hamer. ‘Film is a visual medium, so if you could have just as well read the story or if it is very boring in the format, it is not that interesting to me.’ 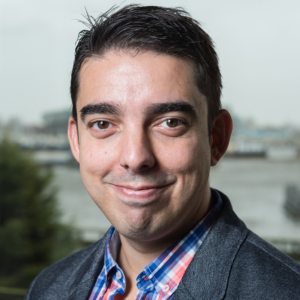 George van Hal is a science editor at de Volkskrant where he mainly writes about astronomy, physics, and space travel. He is also active as a speaker and has written several books on science, aimed at a wide audience.

‘I’ve always really liked writing’, says van Hal. He, therefore, hesitated between studying journalism or something in the sciences. In the end, it became Astronomy where he never let go of writing. At first, he mainly wrote for the student association and eventually ended up in science journalism through internships at scientific journals. In this way, he also ended up at InScience, where he previously gave lectures on science fiction films and was part of various after-shows. ‘And now I’m on the jury’, says Van Hal. ‘It’s a bit different, but I’m really a movie buff and I like science communication so I’m really looking forward to it.’

According to him, the fact that Van Hal specializes in the sciences will not hinder him from watching films about another field. ‘I really enjoy learning more about other directions’, he says. “That might be even more interesting because that information is still new to me.” During the festival, Van Hal not only wants to see whether the story is conveyed well, but also whether this is done in a visually appealing way. ‘You often see that it is one of the two. If a documentary can do both, then it really has an advantage for me.’

Anna Gimbrère is a science journalist and presenter of Pointer (KRO-NCRV). She also contributed to the National Science Quiz as an editor and she currently has her own science program Anna’s Brains (VPRO). In 2019, Gimbrère was named media talent of 2019 by de Volkskrant.

Gimbrère studied theoretical physics at the University of Amsterdam and actually accidentally entered science journalism and the television world. ‘I had always been a talker’, begins Gimbrère. ‘I enjoy explaining things both in class and on TV, I enjoy being on stage and have always had a love for science.’ When it turned out that these interests could be combined, things fell into place for Gimbrère. The link between science and film is therefore very appealing to her. ‘I think it is very important to talk about science because knowledge helps us move forward, and since a visual story often makes a big impression on me, film seems to me to be a very nice way to tell about science.’

During the festival, Gimbrère will try to watch the films in an open way. ‘How does the film come across, does it touch me or not, and does the story surprise me?’ In addition, she wants to pay specific attention to the originality and directing choices of the films. Gimbrère: ‘The longer I work for TV, the more I start to see how difficult it is to tell a story with images. That’s why I think it’s great that I can watch the films as a jury member.’

I spy with my little eye

InScience is looking for volunteers!